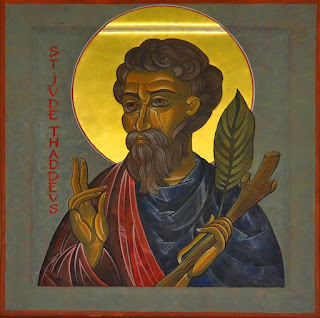 #SaintJude Feast Novena Day 8: Glorious Apostle #StJude, you accepted God's will even to the point of martyrdom. May I accept from God whatever answer he gives to what I now ask in prayer through your intercession. Amen.

Posted by Shrine of Saint Jude at 15:05 No comments: 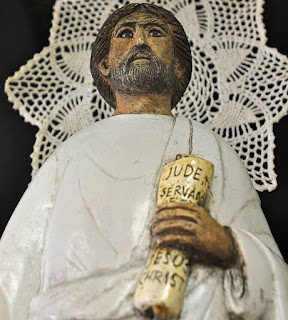 #SaintJude Feast Novena Day 7: Glorious #StJude, Christ chose you as one of the Twelve, and to set down God's Word in sacred scripture. Help us be attentive to God's will, loving God and our neighbours as ourselves. Amen.

Posted by Shrine of Saint Jude at 12:58 No comments: 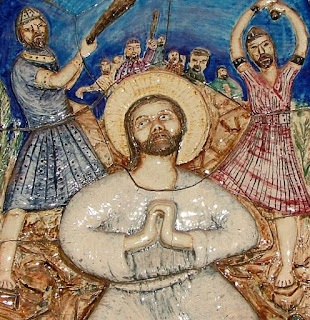 #SaintJude Feast Novena Day 6: #StJude, Apostle and Martyr, help me to trust that God leaves no prayer without an answer, even if it is not what I may expect. Kindly help those who turn to you in desperate cases. Amen.

Pictured: ceramic of the martyrdom of Saint Jude (by Adam Kossowski)

Posted by Shrine of Saint Jude at 14:29 No comments: 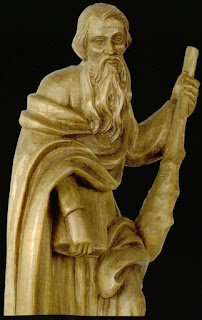 #SaintJude Feast Novena Day 5: #StJude, Kinsman of Jesus Christ, help me follow your example in living and spreading the Good News of God's love for all. I trust in the Lord, as you do. Make me a faithful disciple. Amen

Posted by Shrine of Saint Jude at 09:03 No comments:

Who was Saint Jude?

In the run up to our Feast of Saint Jude celebrations, we are very happy to reproduce part of Fr Kevin Alban's recent letter to the friends of Saint Jude about this great saint. A saint of hope. 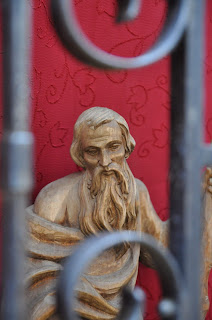 "This year we shall be celebrating over the weekend of 27 and 28 October. We are all looking forward to welcoming as many of you as possible to join us.

Compared with Saint Peter or Saint Andrew, we know very little about Saint Jude really, but we do know one of the most important things of all: that he was called by Jesus to be one of the Twelve Apostles. I want to reflect a little on this so that we can see better who Saint Jude was as one of the closest followers of Jesus.

First of all, there are two versions of his name: Thaddeus in Mark and Matthew and Judas son of James in Luke. Sometimes we put these two names together “Jude Thaddeus”, but that’s just our best guess!! Maybe he was one of those apostles who stayed in the background, quietly working for the kingdom, as many people do. Maybe his exact name is not important: what is more significant is that he was a follower of the Lord. The only name that matters is that of Jesus Christ. Saint Jude has plenty to teach us in his silence and shadowy identity: it’s not about us, it’s about the Kingdom…

Secondly, instead of singling out apostles by name, we can focus on the group of twelve as a whole. It seems clear that Jesus chose these men specifically and deliberately: “I have called you, not you me”, he says quite severely almost. This also points to a fundamental truth in our lives that we owe everything to the Lord, that we cannot be anything without him. The number of apostles is important too.

This reference to the reawakening and regathering of the people would have been instantly comprehensible to those who saw the twelve apostles. So Saint Jude has a significant part to play in the expectation of the coming of God’s kingdom as part of the symbolic group of twelve around Jesus.

The role of the apostles was also to be the closest group around Jesus and to bear witness to his teaching and ministry. Their closeness to Jesus meant that they were able to receive a more detailed explanation of Jesus’ instruction and to ask questions of him. They had a deep and close relationship with the Lord, sharing everything and conversing with him on all sorts of subjects. They enjoyed exactly the relationship that Saint Teresa of Avila describes when she describes prayer as nothing more than a conversation with the one who loves us most. Saint Jude is one who can show us what it means to have a prayerful life with Jesus.

In the Acts of the Apostles we see this group of twelve in the period after the Resurrection and then Ascension of Jesus. The idea of “twelve” is so important for the early Church that the eleven apostles surviving after the departure of Judas Iscariot wanted to find a replacement to bring the number up to twelve again. A key quality they looked for in the “new” member was that he should be one who had accompanied Jesus on his mission and been a witness to it. The point here is that the twelve represented an extension and a continuation of Jesus’ ministry. These apostles were the foundations of what we call the Church.

Finally, the Acts of the Apostles tells us a lot about their work, including Saint Jude. They attended temple worship and prayed together at home, “breaking bread” as a sign of their unity. They preached and taught, provoking the opposition and hostility of the Jewish authorities. They attended to the needy and those on the edges of society, setting up what we would call a solidarity fund to help the poor from their own resources. They worked various “signs and wonders” among the people. They were sensitive to the ethnic composition of the community and rebalanced their ministry to take account of those who felt overlooked or unvalued.

So even if we don’t have very much information about Saint Jude directly, we can build an impressive picture of him as one of the twelve apostles: the Lord’s companion and witness, foundation of the Church, preacher and teacher, helper of the poor and under-privileged… maybe we know quite a lot after all. "

Posted by Shrine of Saint Jude at 10:04 No comments: 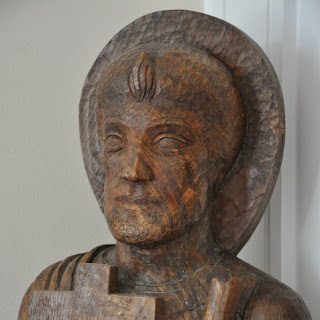 #SaintJude Feast Novena Day 4: #StJude, Apostle of Christ, listen with compassion as I ask your help. Pray that God may answer my prayer as he knows best, giving me grace to see the Holy Spirit at work in all circumstances. Amen.

Posted by Shrine of Saint Jude at 09:42 No comments: 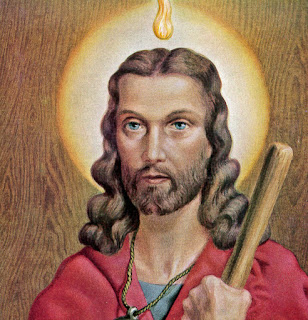 Holy Apostle, #StJude, may God listen to your prayers on my behalf. May I pray with fervour, serve with love, see God's purposes in my trials, and trust that God will answer my deepest needs. Amen.

More information on our Feast Day, here, and for items connected to this great saint, here.

Pictured: Image of Saint Jude at the Shrine

Posted by Shrine of Saint Jude at 09:09 No comments:

O Blessed Apostle, #StJude, intercede for me and my loved ones. May we always serve the Lord, know what is best for us now, and not forget the blessings we have received in the past. Amen.

More information on our Feast Day, here, and for items connected to this great saint, here.

Posted by Shrine of Saint Jude at 02:04 No comments: