As 23 April is on a Sunday this year, Saint George's Day will be celebrated at Mass tomorrow instead. At the National Shrine of Saint Jude - a national shrine in England - we celebrate all the special saints of this Island. We have lit a candle in honour of Saint George today. But, what do we know about Saint George?


Saint George (c. 275/281 – 23 April 303 AD) was born in Lydda, and was probably a soldier in the Roman army - he was later venerated as a Christian martyr. Saint George became an officer in the Roman army in the Guard of Diocletian. In hagiography, Saint George is one of the most venerated saints in the Catholic (Western and Eastern Rites), Anglican, Eastern Orthodox, and the Oriental Orthodox churches. He is immortalised in the tale of Saint George and the Dragon and is one of the Fourteen Holy Helpers. His memorial is celebrated on 23 April, and he is regarded as one of the most prominent military saints.

Why is he England’s Patron Saint?
The earliest documented mention of St George in England comes from the venerable Bede (c. 673–735). He is also mentioned in ninth-century liturgy used at Durham Cathedral.  Early (c. 10th century) dedications of churches to St George are noted in England, for example at Fordingham, Dorset, at Thetford, Southwark, and Doncaster.  In 1222 the Synod of Oxford declared St George's Day a feast day in the kingdom of England. Edward III (1327–1377) put his Order of the Garter (founded c. 1348) under the banner of St George. This order is still the foremost order of knighthood in England, and St George's Chapel at Windsor Castle was built by Edward IV and Henry VII in honour of the order.

In his play Henry V, William Shakespeare famously invokes the Saint at Harfleur prior to the battle of Agincourt (1415): "Follow your spirit, and upon this charge Cry 'God for Harry, England, and Saint George!'" At Agincourt many believed they saw him fighting on the English side.

St George's Day was a major feast and national holiday in England on a par with Christmas from the early 15th century. The Cross of St. George was flown in 1497 by John Cabot on his voyage to discover Newfoundland and later by Sir Francis Drake and Sir Walter Raleigh. In 1620 it was the flag that was flown by the Mayflower when the Pilgrim Fathers arrived in Plymouth, Massachusetts.

Happy Saint George's Day to all the friends of the National Shrine of Saint Jude! The image below comes from one of our older prayer cards celebrating this great Saint. See more, here, or here. 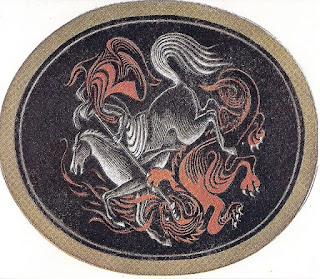 Posted by Shrine of Saint Jude at 12:32 No comments: