Our photo(s) of the month shows the Shrine of Saint Jude earlier this month during its repainting, and the statue having a temporary home in our office. 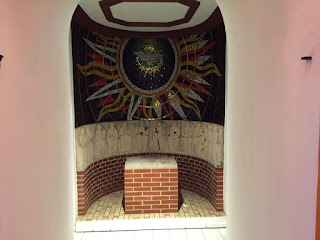 This photo show a very rare view of the inner shrine without the 16th Century statue of Saint Jude; the reliquary; and the iron gates. These were all removed so that the area could be freshly painted.

The Shrine, the mosaic apse, ironwork and exterior frieze in mosaic were designed by Michael Leigh A.R.C.A., who worked on various Churches including some of the mosaics in Westminster Cathedral.

The carvings of the Twelve Apostles round the apse in the inner Shrine are by Anthony Foster. He was Eric Gill's principal assistant, and Gill had a very high opinion of his work. The design was based on the Malmesbury Apostles. St. Paul has been substituted for Judas Iscariot.

The redecoration was a kind donation from a friend and supporter of the Shrine: Mrs Bharadwa. We are very grateful to her and her family for her donation.

And, here's a photo of how the Shrine looks normally: 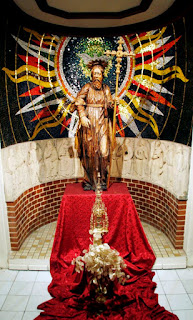 Posted by Shrine of Saint Jude at 12:17 No comments: