On 30 May 2015 the National Shrine of Saint Jude began their Diamond Jubilee commemorations with the Summer Celebration. The Mayor and Mayoress of Faversham, Councillor Nigel A Kay and Mrs Anne Kay attended the day, as did a number of other VIPs, including the Prior Provincial of the British Province of Carmelites, Fr. Antony Lester, O.Carm. The National Shrine is looked after by the British Province of the Carmelites.

On arrival, the Mayor of Faversham and other VIPs were taken on a tour of the Shrine and site by Fr. Wilfrid McGreal, O.Carm (Prior of the Carmelite community).  The guests discovered the history behind the Shrine and learnt that the founder, Fr Elias Lynch, O.Carm sat on the town council for a number of years. 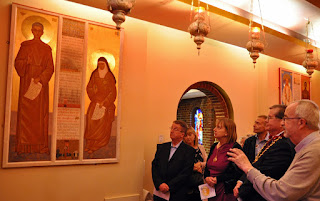 In the afternoon, an outside Mass of thanksgiving was celebrated by the Prior Provincial of the British Province, Fr. Tony Lester, O.Carm. Fr. Tony thanked all the Pilgrims who have supported and visited the Shrine since 1955.  He noted that the Carmelite Order has been very proud of the work of the Shrine, the community, lay staff and volunteers over the last sixty years. The Mass was followed by a procession past the beautiful sixteenth century statue of Saint Jude.

The Mayor and other VIPs (including Guild of Saint Jude members) then enjoyed a drinks reception in the Saint Jude Welcome Centre. Later, the Mayor was invited to say a few words by Mr. Matt Betts, Development Manager at the Shrine. Councillor Nigel Kay thanked the Carmelite Order for their invitation to the Summer Celebration, and observed that the Shrine was a hidden jewel in Faversham. He was very proud to know that the Shrine was continuing the long history of pilgrimages to the area since the middle ages. Both he and his wife had an enjoyable day.

The weather was kind and the Shrine welcomed over three hundred pilgrims. Fr Michael Manning, Chaplain, said: “It was a truly joyous occasion and we were so pleased to have so many friends of Saint Jude attend”. Mr Matt Betts, Development Manager remarked: “The National Shrine of Saint Jude is proud of its 60 years of ministry and we are very pleased that the Worshipful Mayor and other VIPs could attend this special day. We are looking forward to seeing pilgrims at our Feast celebrations in October where the Diamond Jubilee will conclude – all welcome”. 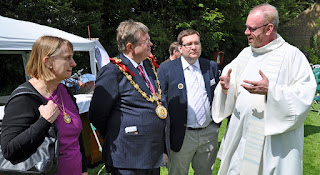 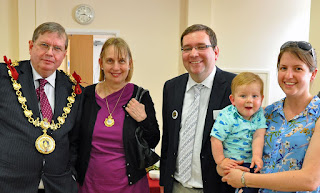 Posted by Shrine of Saint Jude at 11:11 No comments:

The following novena was recently published in Carmelite News and is from the National Shrine of Saint Jude. Our novena to the Sacred Heart is for nine days.

You can pray the novena in private, with your friends or family, or in a group. The novena starts on Thursday 4 June and continues until 12 June 2015.

Merciful God,
we rejoice in the gifts of love
we have received from the
heart of Jesus, your Son.
Open our hearts to share his life
and continue to bless us with his love.

We ask this through
our Lord Jesus Christ, your Son,
who lives and reigns
with you and the Holy Spirit,
one God, for ever and ever.

Posted by Shrine of Saint Jude at 13:11 No comments: