Why not send an Easter card or novena from the National Shrine of Saint Jude to your friends and family? We have great Easter card packs on offer. Some of the designs are below.
All proceeds go towards the Shrine and the work of the Carmelites in Britain and worldwide. These can be purchased via: http://tinyurl.com/stjudeshop Posted by Shrine of Saint Jude at 14:17 No comments:

Email ThisBlogThis!Share to TwitterShare to FacebookShare to Pinterest
Labels: easter

The Biblical Origins of Our Jubilee Year

Carmelites from Britain (including the Development Manager of our Shrine) took part in a gathering held in Rome in mid-January 2016 for those involved in the work of pilgrimage and shrine ministry.

On the second day of our visit, we took the opportunity to build fraternal links with fellow Carmelites, and to make a pilgrimage to some of the Order's holy sites in the Eternal City. Warm hospitality was offered by the friars at the Basilica of San Martino ai Monti, where we met Fr. Craig Morrison, O.Carm., who teaches Aramaic and Sacred Scripture at the Pontifical Biblical Institute in Rome. Fr. Craig has very kindly allowed us to publish his excellent article on the biblical origins of our Jubilee Year:

"The Book of Leviticus, the third book of the Old Testament, announced to the ancient Israelites the specifics of their Jubilee Year observance: “You shall consecrate the fiftieth year and you shall proclaim liberty throughout the land to all its inhabitants. It shall be a Jubilee for you” (Leviticus 25:10). So during the Jubilee Year, our Israelite ancestors freed their slaves, cancelled debts, and everyone, rich and poor alike, enjoyed a year of rest. It was a year of clemency and mercy for those in need, especially those who had been sold into slavery because of financial difficulties.

This year’s Jubilee is called “extraordinary” because it is not in the cycle of the fifty-year Jubilee as the Bible commands, but has been proclaimed for a special occasion. Pope Francis announced this special Jubilee Year to remind all the baptised that the Church in the world is a sign of God’s mercy and clemency toward all peoples. Jesus too understood his own mission as an extraordinary Jubilee Year. At the beginning of his public life, he returned to the synagogue in his home town of Nazareth (see Luke 4:14-20). It was the Sabbath day (our Saturday) and Jesus, an observant Jew, stood up to read from the Bible. He chose verses from chapters 58 and 61 of the Book of Isaiah. The Bible at the time of Jesus was written on lengthy scrolls, and so the servants in the synagogue that day would have had to roll the scroll for quite some time as Jesus scanned the Hebrew text looking for the passages he wanted. The congregation must have been waiting with fervent anticipation: “What passage is this rabbi searching for?” Finally Jesus finds the text from Isaiah that he wants to read aloud:


"The Spirit of the Lord is upon me, for he has anointed me to
bring good news to the poor. He has sent me to proclaim
release to the captives and recovery of sight to the blind, to let
the oppressed go free, to proclaim the year of the Lord’s
favour.”

Jesus’ announcement that his time on earth would be a “year of the Lord’s favour” proclaimed to this ancient Jewish congregation that a Jubilee Year was about to begin. Once Jesus leaves the synagogue we follow him through the Gospels to discover that everyone whom Jesus meets experiences the Jubilee. Jesus stops at the casket of a widow’s only son and addresses the dead man: “Young man, I say to you, rise!” (Luke 7:14). A paralytic lying beside the pool at one of Jerusalem’s gates rises from the mat on which he has been lying for 38 years: “Stand up, take your mat and walk.” (John 5:8). Another paralysed man, after being lowered down through the roof of the house where Jesus is teaching, never even gets a chance to open his mouth before Jesus says to him, “Friend, your sins are forgiven you” (Luke 5:20). An excluded woman with a haemorrhage is called a “daughter” by Jesus (Luke 8:48) and a leprous man, touched by Jesus, can return to life in the Jewish community. These individuals and so many others in the Gospel celebrate Jesus’ Jubilee year.

Many of these key moments of mercy in the Gospels are depicted on the Holy Doors of St. Peter’s Basilica—the bronze doors that Pope Francis opened on 8 December 2015 to inaugurate the Jubilee year. The sixteen images on the doors trace various Jubilee moments in biblical history—moments of redemption. Among my favourites is the depiction of Jesus’ glance at Peter who has just denied knowing Jesus. The Latin inscription is taken from Luke 22:61 “conversus Dominus respexit Petrum”; “The Lord turned and looked at Peter.” You can see at the top of the scene the rooster that has just crowed, reminding Peter of Jesus’ prediction at the Last Supper: “I tell you, Peter, the cock will not crow this day, until you have denied three times that you know me” (Luke 22:34). The high priest Caiaphas is seated in the background and Jesus, his hands now bound, looks at Peter who cannot look at him. Through his tears, he recognizes that he has denied knowing the one whom he recognized as the messiah just as Jesus is about to embrace his cross. But after the resurrection, Jesus’ first words to Peter are “Peace be with you” (Luke 24:36). In that sacred moment Peter experiences the profound meaning of Jesus’ “Year of Favour,” the Jubilee Year that he announced that day in the synagogue. The debt Peter owes to Jesus is cancelled in the risen Christ’s loving greeting: “Peace be with you.” 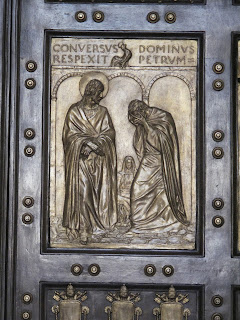 When Pope Francis announced the Jubilee year, he wrote that the Holy Doors are doors of mercy “through which anyone who enters will experience the love of God who consoles, pardons, and instills hope.” The faith-filled millions, who will pass through St. Peter’s Holy Doors this year, will pass by the image of Peter weeping for his sin. We too can pass through the holy doors in the National Shrine of Saint Jude knowing that Jesus waits for us on the other side with the same words of mercy that he said long ago to his friend and disciple Peter: “Peace be with you.”"