As introduced in my first blog update on pilgrim visits from Faversham, one of the many advantages to visiting the Shrine of Saint Jude is that pilgrims have opportunities to add to their Christian experience after a visit to us. This blog is going to include a semi-regular look at some of the pilgrimage sites you can visit whilst down here – the Shrine of Saint Jude can then simply be the start; middle or end of your pilgrimage.

Last time on this blog, I discussed Canterbury Cathedral and the interesting areas and shrines there for the pilgrim, so I've decided to stick with Canterbury for this next update, and discuss the wonderful: St Augustine's Abbey.

This great abbey, which marks the rebirth of Christianity in southern England, was founded shortly after AD 597 by Saint Augustine. It is situated outside the Roman and medieval city walls of Canterbury, and is on the main road east out of the city to the Kent coast. Most of the abbey is now in the care of English Heritage – other parts are also occupied by the King’s School and Canterbury prison. However, under the areas owned by English Heritage, it is possible to see: parts of the main cloister buildings; main gates; the infirmary; and the outer court, plus numerous chapels and important tombs of Anglo-Saxon kings and some Archbishop's of Canterbury.

The monastery was founded on this site in about 598 by Saint Augustine. He had with him a small group of monks, and had been sent to England from Rome by Pope Gregory the Great to restore Christianity to the isles. Christianity had first come to Britain with the Romans, but after the fall of the Western Roman Empire in 476 AD, and the increasing invasions of pagans in these isles, the faith only survived in the unconquered areas of Wales and the some areas in the west of England.

Kent was chosen as the place to reintroduce Christianity, because the local king, Ethelbert was a very powerful leader in the area. He was also married to Bertha, a Frankish princess who was already a practicing Christian. The missionaries were welcomed by King Ethelbert, and he soon converted to the faith. This was an important step forward, and King Ethelbert fully supported Saint Augustine’s mission by providing an old Roman church in Canterbury so it could be converted into a Cathedral, and provided the site to the east of the city to found this monastery.

The monastery thrived for over 1000 years and the abbey was expanded and rebuilt several times. Saint Augustine’s also established extensive estates mostly in East Kent, and at its height it held almost 12,000 acres of land. These were to support its work in Canterbury as it had become a very important pilgrim city.

However, by 1532, King Henry VIII had declared himself Supreme Head of the Church of England, and afterwards there was an increased pressure to reform or destroy institutions like St Augustine’s Abbey. By 1538, Thomas Cromwell, Henry’s Chief Minister, had set his sights on the bigger monasteries, and St Augustine’s was surrendered to the King’s Commissioners on 30 July of that year. The Abbot and the monks were given a pension, and the books, gold and silver plate were scattered all over England.

After the dissolution of the Abbey, King Henry VIII converted many of the buildings into a royal palace for his fourth Queen: Anne of Cleves. However it was not used much, and after the death of Henry, the buildings were passed onto various Lords and families, until finally early in the twentieth century, it was given to English Heritage.

What will the pilgrim see at the Abbey?

You will first walk through the very informational museum – full of facts about the abbey's origins and its development. Afterwards, the pilgrim can walk around the ruins of the Abbey. A free audio tour is provided for the visitor – I would highly recommend this!

As the guide for this holy place states: “..the site of St Augustine’s Abbey presents a challenge to the visitor, as, apart from the north wall of the nave ahead of you, and the chapel of Saint Pancras, few of the buildings survive to their original height..” As such, it is very difficult to imagine that the church was only slightly smaller than the Cathedral! The other confusion lies in the fact two abbey complexes dating from different times are now viewable: the Saxon monastery and the Norman monastery can be seen here. This is thanks to very extensive archaeological digs in the nineteenth and twentieth centuries.

I will now discuss some of the interesting buildings that are here to see for the pilgrim or visitor:

Saint Anne’s Chapel
This small chantry chapel of Saint Anne was used to say Masses for the dead. A number of graves were in this chapel.

South Transept
Soon after it was built, several Anglo-Saxon kings were reburied here, including the following Kings of Kent: Edbald, Lothaire, Whitred, and a King of Wessex: Mulus – who died in a battle with Kentish kings near here. In the east wall is a chapel dedicated to Saint John the Baptist. 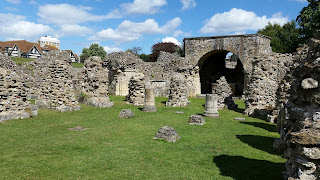 The Norman Crypt and Presbytery
On the right hand side of this area is the chapel dedicated to Saint Thomas the Apostle (Jude’s friend and fellow Apostle). This is an excellently preserved chapel as the remains to an original altar slab can be seen here. This was found when the chapel was excavated and probably came from the main church.

The central chapel at the east end of the church was dedicated to the Blessed Virgin Mary in the Crypt: until the 1270s, it was used for the singing of Mass. In 1325, after the founding of the Lady Chapel, it was rededicated to St Mary and the Angels.

The northern chapel is not as well as preserved as other areas, but was dedicated to the great English saint: Saint Richard of Chichester.

The Presbytery
The presbytery was the area immediately in front of the high altar. It had the main shrines of the Abbey behind it, including a shrine to St Augustine, and twelve other shrines to eleven archbishops and Saint Mildred.

Saint Pancras Chapel
Pope Gregory the Great gave impetus to the cult of Pancras, sending Augustine to England carrying relics of that saint and literature on his legend. This is why many English churches are dedicated to Pancras; St Pancras Old Church in London is one of the oldest sites of Christian worship in England. In medieval iconography, Pancras was depicted as a young soldier.

This chapel dates back to the Anglo-Saxon period, but there may have been an earlier pagan building here before then. A legend says that Saint Augustine said his first Mass in Canterbury in the area near this chapel.

The cloister and other monastic buildings
The cloister is square and about 37 metres by 35 metres with a garden surrounded by covered walkways. It formed the main living area for the monks and gave access to all the main buildings of the Abbey. Along from the cloister, it is possible to visit the ruins of the kitchen, the monks’ dormitory, the infirmary and the chapter house, as well as other areas of interest.

Saint Augustine’s Abbey is a very prayerful and peaceful place – I would highly recommended any visitor from our Shrine to go and see.

Next time on this blog, I will be writing about some of the pilgrimage sites in Faversham.

Prayer to Saint Augustine of Canterbury:
O Lord our God, who by your Son Jesus Christ called your Apostles and sent them forth to preach the Gospel to the nations: we bless your holy name for your servant Augustine, first Archbishop of Canterbury, whose labours in propagating your Church among the English people we commemorate; and we pray that all whom you call and send may do your will, and bide your time, and see your glory; through Jesus Christ our Lord, who lives and reigns with you and the Holy Spirit, one God, for ever and ever. Amen.


Prayer to Saint Pancras:
God of mercy,
give your Church joy and confidence
through the prayers of Saint Pancras.
Keep us faithful to you
and steadfast in your service.
Through our Lord, Jesus Christ,
who lives and reigns with you
in the unity of the Holy Spirit,
one God, for ever and ever.
Amen.

Posted by Shrine of Saint Jude at 19:14 No comments:

New stock in our online shop

We have added a number of new items to our online shop, please do visit.

Some highlights are below:

Saint Jude keyring
Image of Saint Jude based on the statue by Adam Kossowski. 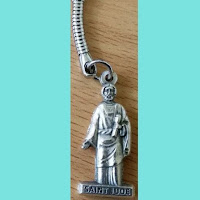 
Our Lady of the Assumption
This statue is a copy of the one at the Shrine of Our Lady at Aylesford Priory. The original statue was created by the great sculptor, Adam Kossowski. View here. 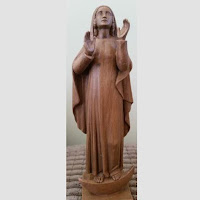 Medal of Saint Joseph
This medal was created in the early days of the Shrine and is very rare. 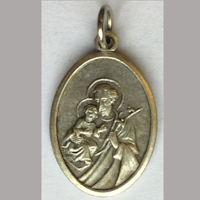 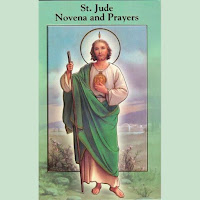 These items and many more are available at www.stjudeshrine.co.uk.

The Shrine is part of the Carmelite Charitable Trust - Registered Charity Number 1061342. All proceeds from the shop go towards the Shrine and the work of the Carmelites in Britain and worldwide.

Posted by Shrine of Saint Jude at 07:43 No comments: