It is with sadness, but trusting in the loving mercy of God, that the British Province of Carmelites announces the death this morning of our brother Fr. Piet Wijngaard, O.Carm.

The following text comes from the announcement on the British province site:

"Piet was born in The Netherlands in 1939. Growing up there during the Nazi occupation of World War II, Piet was greatly impressed with the witness to the Gospel of Carmelite martyrs such as Blessed Titus Brandsma.

Working hard was a hallmark of Piet's personality, and his final appointment was as Parish Priest of Faversham, where he had also served as Chaplain to the National Shrine of Saint Jude. He celebrated Mass in the parish church on Tuesday of this week.

The Carmelites express our condolences to Piet's family and friends, and thank everyone who has cared for him. We thank God for the great example Piet gave us, of living a Carmelite vocation to the full. We ask you to join with us in praying for Piet, who remains tied to us in Christ by baptism and the bonds of Carmel."

Fr Piet's full obituary on the website can be seen, here.

As Chaplain (and later on too), Fr. Piet wrote a number of updates for our blog (you can view them all here). When Fr. Piet was diagnosed with his illness back in 2014, he wrote an update called: Why not me?, which is reproduced below.

“…the bad news is that I have a malignant tumour on my right lung. The whole situation makes me think of a lady at home in Holland.

Her name is Truus. She was happily married, was a real bubbly young woman with five sons. One Saturday afternoon her husband, Henk, was watching a couple of their boys playing soccer. It was a very exciting match and he died there and then of a massive heart attack. A long time later Truus told me that she had been pretty miserable and had been going around for a couple of years with only one question in her head “Why me?” until one morning she woke up and found herself asking “Why not me?”. It changed her life in an instant and she became once again the cheerful mum she had been before.

Now I can really share her sentiments. Millions of people have cancer and after all two of my own sisters died of it and therefore “Why not me?”. Many thanks for your great support and many prayers…”

Fr. Piet always said that Saint Jude was the Patron Saint of Hope. How right he was - and Piet was a man full of hope and love.

We will miss him a lot at the Shrine and Shrine Office, and we are very grateful for his presence and service to everyone at the Shrine. May Piet, and all the souls of the faithful departed, rest in peace.

Thanks to the British Province of Carmelite website and Johan Bergstrom-Allen. 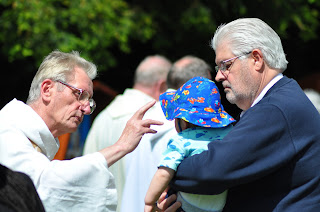 Our Mass for children was celebrated at the end of September by Fr Brendan Grady, O.Carm - Chaplain. Here are some photos of the Mass which was celebrated in front of the Shrine of the Infant of Prague at the National Shrine of Saint Jude: 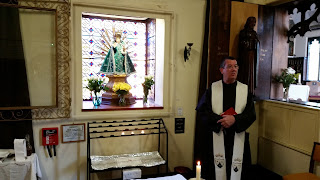 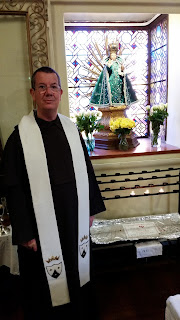 Thank you to Fr Brendan Grady for celebrating and preaching at the lovely Mass.

Posted by Shrine of Saint Jude at 13:36 No comments: