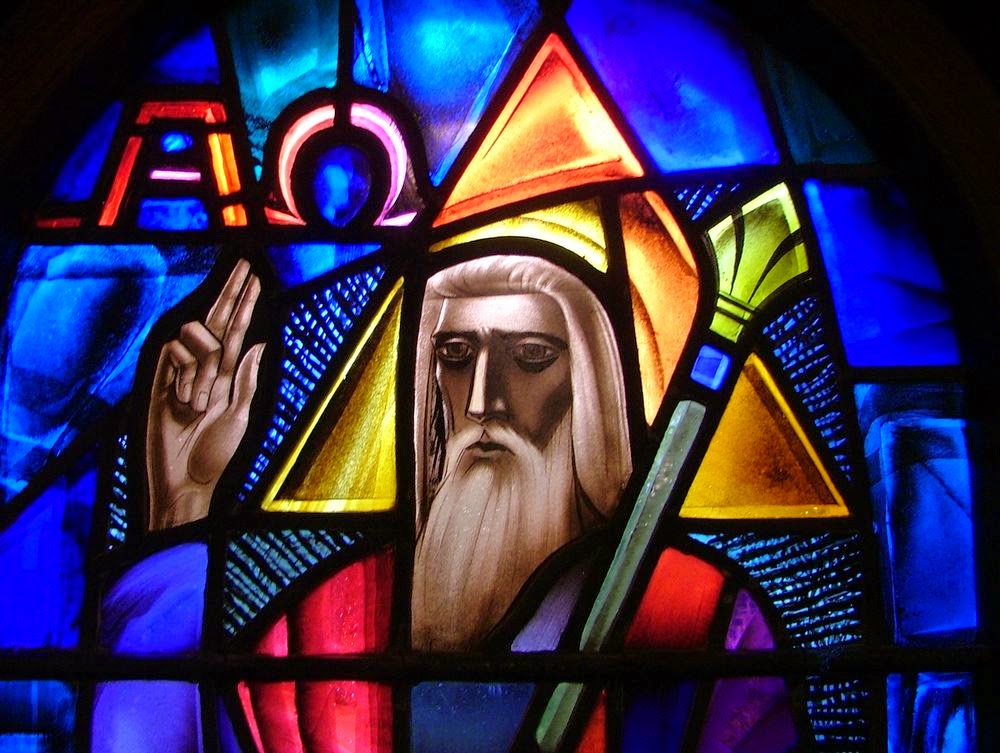 God the Father - a stained glass window in the Shrine.

The stained glass windows were installed about 1957 and were also executed by Richard Joseph King. This series of windows can be compared to similar windows made for the Church of Swinford in Mayo in the 1950s. The artist also did a picture of Our Lady of Mount Carmel for the Carmelite Church in Aberystwyth.

The hand of God raised in blessing with the sceptre across his left shoulder. He is surrounded by rays. God is presented as a King, but also with a cloud or halo in the shape of a triangle, traditional symbols of God the Father and of the Trinity. Alpha and Omega, the beginning and the end are seen on the left. The Father created the earth and water, moon and stars, Adam and Eve. Moses and the Ten Commandments. The serpent and the cross may be a reference to the bronze serpent on the staff of the time of Moses, and to the Garden of Eden as shown by Adam and Eve and the tree of knowledge. It also refers to Christ overcoming evil. Water is seen coming from the rock, again a reference to Moses. There are links between the Old and the New Testament. The artist has used reds and pinks especially in the garments of God.
Posted by Shrine of Saint Jude at 07:47 No comments:

Email ThisBlogThis!Share to TwitterShare to FacebookShare to Pinterest
Labels: God, photo of the month

Thank you to all those who visited us during the Feast celebrations - it was great to see you all.

Hundreds of pilgrims attended each of the three Saint Jude Celebration days. Pilgrims lit candles, took part in Masses, were anointed with St. Jude's Oil, and venerated a relic of the Apostle.

Posted by Shrine of Saint Jude at 08:56 No comments: