As introduced in my last two updates (see Canterbury Cathedral and St Augustine's Abbey), a visit to the Shrine of Saint Jude allows the visitor a chance to see many other interesting and fascinating sites of pilgrimage either after a visit to us or on the way to us. All of this helps in having a truly great spiritual experience.

In this blog, I am going to discuss Faversham, the market town of kings, and, of course, where we are located.

Faversham is a market town and civil parish in Kent, England. It was for many years a stopping off point for pilgrims to Canterbury. The town is 48 miles from London and only 10 miles from Canterbury. It is close to the A2, which follows an ancient British trackway which was used by the Romans and the Anglo-Saxons, and was known as Watling Street.

There has been a settlement at Faversham since pre-Roman times and archaeological evidence has shown a Roman theatre was in the town. It was inhabited by the Saxons and mentioned in the Domesday book as Favreshant. King Stephen favoured Faversham and thus established Faversham Abbey, which survived until the Dissolution of the Monasteries in 1538. After the Reformation, the town became an important seaport and established itself as a centre for brewing. The Shepherd Neame Brewery was founded in 1698 and remains an important part of the town.

If you enjoy historical buildings, then Faversham is the perfect place. Over 500 of the buildings in the town are listed by English Heritage (including Whitefriars here).

Street names such as Abbey Street, Court Street, and Tanners Street (where the Shrine is) provide indications of the town's fascinating past. Many of the timber-framed buildings are still around today. The Faversham town website notes that "as an actor, Shakespeare visited the town and if he were alive today he'd feel quite at home! Faversham has cared for its heritage like few other towns." 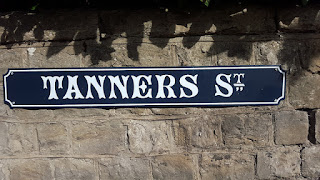 Unfortunately, the great Faversham Abbey no longer exists to visit. It was a Cluniac style monastery immediately to the north-east of the town and was founded by King Stephen and his wife Matilda of Boulogne in 1148. A party of monks from Bermondsey Abbey provided the nucleus and the first abbot. It later became the burial place of the King, Queen Matilda, and their eldest son, Eustace IV of Boulogne. All three tombs were lost after the Dissolution of the Monasteries (or perhaps were buried in St Mary's - see below).

The town also boasts a great heritage centre: the Fleur de Lis Heritage Centre. The heritage centre traces Faversham's long and colourful past from gunpowder, bricks and brewing, hop farming and printing, replica local shop fronts to the period schoolroom and Victorian kitchen, and so much more.

The first documented evidence of a church in Faversham goes back to 1070, in a Charter of William the Conqueror, giving the church to the Abbey of St Augustine at Canterbury (see our second blog update). Later, the church was connected to the Abbey in Faversham (see above).

Saint Mary of Charity is a striking flint church that is said to be the final resting place of King Stephen, after his tomb in Faversham Abbey was ransacked during the Reformation. The church is partly medieval; partly Georgian; and partly Victorian. It is away from the town centre, and sits behind the brewery and above the old creek.

The church features an unusual corona spire, added in the late 18th century after the original medieval spire was destroyed. It is based on the church of Saint Dunstan in the East in the City of London, and the spire looms over attractive Georgian streets in the town.

The interior is a patchwork of architects – there is a wide Georgian nave (designed by George Dance, Snr); then the great architect, George Gilbert Scott (architect of the Saint Pancras station hotel, for example) worked on a lot of the interior in the 1850s by keeping but updating much of Dance’s work. At the west-end of the nave, the pilgrim will be able to see parts of the old Norman church. As such there is a mix of Georgian, Victorian, Gothic and Norman in the church.

In addition to the monumental brasses, painted Tudor tombs, the pilgrim will find ‘one of the most significant medieval artefacts in Britain’, which is the octagonal column covered entirely with vivid paintings dating back to 1306 (see image below). 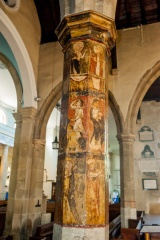 The Faversham area has a wide variety of churches representing the main Christian denominations; and many have fine church buildings dating back hundreds of years. You can easily spend a whole day in the town visiting the churches (including our very own Our Lady of Mount Carmel, which the Shrine adjoins).

Just in front of the Shrine, the pilgrim can see the very impressive Faversham Almshouses in South Road. These consist of 70 accommodation units, most of them in the splendid 1863 building.

The building was designed by two Kent architects, Hooker and Wheeler and is 470ft long, with projecting bays and an absolutely stunning central chapel. The almshouses chapel is not open for public visits unless a prior arrangement has been made, but it is well worth a look if you can arrange this.

Saints Crispin and Crispinian are the patron saints of cobblers, curriers, tanners, and leather workers (apt in many ways that we are based on Tanners Street). These saints are very special in Faversham and we remember them at the Shrine (see below). One account states that the two saints were beheaded during the reign of Diocletian; the date of their execution is given as 25 October 285 or 286.

An alternative account advises that they are the sons of a noble Romano-Briton family who lived in Canterbury. After their father was murdered, their mother sent them to London to seek apprenticeship. However, they got no further than Faversham after coming across a shoemaker's workshop and decided to travel no further. Tradition suggests that they were later executed for being Christians.

The Battle of Agincourt was famously fought on Saint Crispin's Day. In Shakespeare's famous play, Henry V spoke to his knights about Saint Crispin before the battle:


"And say "To-morrow is Saint Crispin."
Then will he strip his sleeve and show his scars,
And say "These wounds I had on Crispin's day."
Old men forget; yet all shall be forgot,
But he'll remember, with advantages,
What feats he did that day. Then shall our names,
Familiar in his mouth as household words—
Harry the King, Bedford and Exeter,
Warwick and Talbot, Salisbury and Gloucester—
Be in their flowing cups freshly rememb'red.
This story shall the good man teach his son;
And Crispian shall ne'er go by,
From this day to the ending of the world,
But we in it shall be remembered—"

A plaque commemorating the location of their house can be seen on Market Street.

At the Shrine of Saint Jude, we have some information about these local saints (see below). 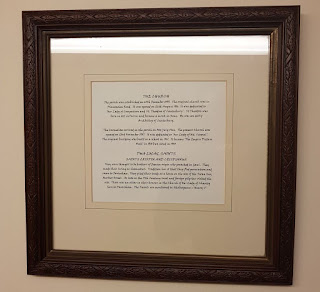 Faversham is a fascinating town, and is a great place to visit after or before you come to us. Please come and see us and the town soon. Our Summer Celebration is on 26 May 2018 - why not join us then? You can find out more information, here. Afterwards, why not look around Faversham?

St Crispin and St Crispinian, may all shoemakers provide shoes for those who cannot afford them and keep their feet ever protected so that they may walk a good purpose. Pray for us, dear Saints, to obtain for us a lively faith, constancy in good works, and perseverance in the grace of God even unto death. Amen.

Please don't forget to look at the previous chapters:


All photos taken by Matt Betts or Johan Bergstrom-Allen (for the Carmelites), except the image of the plaque which is from the Faversham Tourist Information.

Posted by Shrine of Saint Jude at 14:51 No comments: