Thoughts from our Chaplain - Octave of Easter

This week after the triduum is known as the Octave of Easter; the eight days following Easter.  However, this seems to imply that it is a separate entity while it is in fact a continuation of the celebration of the Easter festivities.  It is, as it were, one continuous festal cycle from the solemn entry into Jerusalem of Jesus, through the supper in the upper room and the prayer in the garden followed by the trial and crucifixion.  Three days later Jesus is risen from the dead and we then enter the Octave ending with the Second Sunday of Easter; fifteen days of celebrating Easter.

This Octave Week is marked especially by the Gospel reading which the Church puts before us. They start by following on from the end of the readings for Easter Sunday with Peter and the ‘disciple whom Jesus loved’ at the empty tomb early in the morning.  We hear two more accounts of how the tomb was found, firstly by the women who meet Jesus and are told to “go and tell my brothers that they must leave for Galilee; they will see me there”. This gospel also tells us about the guards who tell the chief priests about the empty tomb and the start of the rumour that Jesus body was taken by his disciples.  On Tuesday we hear about Mary weeping outside the tomb and then meeting the ‘gardener’ who reveals himself as The Lord when he calls her by her name. Mary is told to go and tell the brothers that Jesus is “ascending to my Father and your Father, to my God and your God”.  So here we have three excerpts from the Gospels of John and Matthew developing the events at the empty tomb and bringing in new elements; the clothes folded in the tomb (John) with the cloth that covered the head separate; the fact that Jesus was not staying around Jerusalem but will go to Galilee to await the disciples and thirdly the announcement of Jesus that he is going to ascend to his Father and our Father.

Wednesday gives us the famous story of the two disciples on the road to Emmaus and how Jesus joins them and explains all the scriptures that refer to his life, death and resurrection.  Joining them for supper (note the time of day) Jesus says the blessing and breaks the bread with them and then disappears leaving them alone.  I ask myself where these disciples were going; out for a pleasant walk and  evening meal or were they leaving Jerusalem to return home to Galilee.  Given that they tell Jesus about the events around his crucifixion they would probably be going back to an area where they felt secure and safe – their home villages.  But they also mention the resurrection and the empty tomb.  It was clear they still did not understand what Jesus had told them on his journey with them.  They then sit down to Supper, an evening meal, a meal which seems to reflect the time of the Supper in the Upper Room.  Here Jesus repeats the actions from that last meal together as he says the blessing and breaks bread giving it to the disciples.  Suddenly they are aware of whom they have before them; but he is gone.  The two then return to Jerusalem, something has given them courage to go back and tell the others about what happened to them and they there learn about the other appearance of Jesus.  See how the gospels are building up or filling in details about the time following the Triduum.

Thursdays gospel continues on from the Emmaus episode and has Jesus appearing to the gathered disciples, probably in the room where they pray together and they are so shocked they think him to be a ghost (it was obvious he didn’t walk in through the door then) but he proves he is the Risen Lord by showing them the wounds caused by his crucifixion.  Jesus then eats with them (not a ghost-like habit) and again explains what he meant when he had talked about his suffering, death and resurrection.  The third time Jesus appears to his disciples is at Lake Tiberias where he tells the unsuccessful fishermen to re-cast their nets and behold a huge catch is netted.  He then invites them for breakfast and they eat fish and bread together; Jesus breaking the bread and feeding them.

Saturday’s gospel gives us a quick resume of the previous days ending with his command to all the disciples to Go out to the whole world; proclaim the Good News to all creation.  Monday to Saturday we have been taken deeper and deeper in to the events of the Easter Triduum in a number of vignettes which explain different aspects of those three days of His passion, death and resurrection.  We too have been given this instruction, this explanation because like the disciples we often don’t fully understand what Jesus says to us.

Posted by Shrine of Saint Jude at 20:41 No comments:

During the morning, Fr. Fernando and Fr. John met the community at Faversham, and then the team at the Shrine Office, so that they could see the work of the Apostolate. Afterwards, they were taken on a tour of the Shrine.

In the afternoon, Fr. Fernando celebrated Mass for the community and lay staff in front of the beautiful sixteenth century statue of Saint Jude.

Fr. Fernando launched the diamond jubilee by thanking all the Pilgrims who have supported and visited the Shrine since 1955.  Fr. Fernando noted that the Carmelite Order are very proud of the work of the Shrine, the community and lay staff. He then unveiled a plaque to celebrate the start of the diamond jubilee and his visit. On his departure, Fr. Fernando was given a gift of a statue of Saint Jude and Life Membership of the Guild of Saint Jude.

Fr Michael Manning, Chaplain, said: “It was a truly joyous occasion and Fr. Fernando thoroughly enjoyed his visit to our special Shrine”. Mr Matt Betts, Development Manager remarked: “The National Shrine of Saint Jude is rightly proud of its 60 years of ministry and we are very pleased that Fr. Fernando has started our celebrations off. We are looking forward to seeing pilgrims at our Summer Celebration on 30 May 2015, when celebrations will continue – all welcome”. 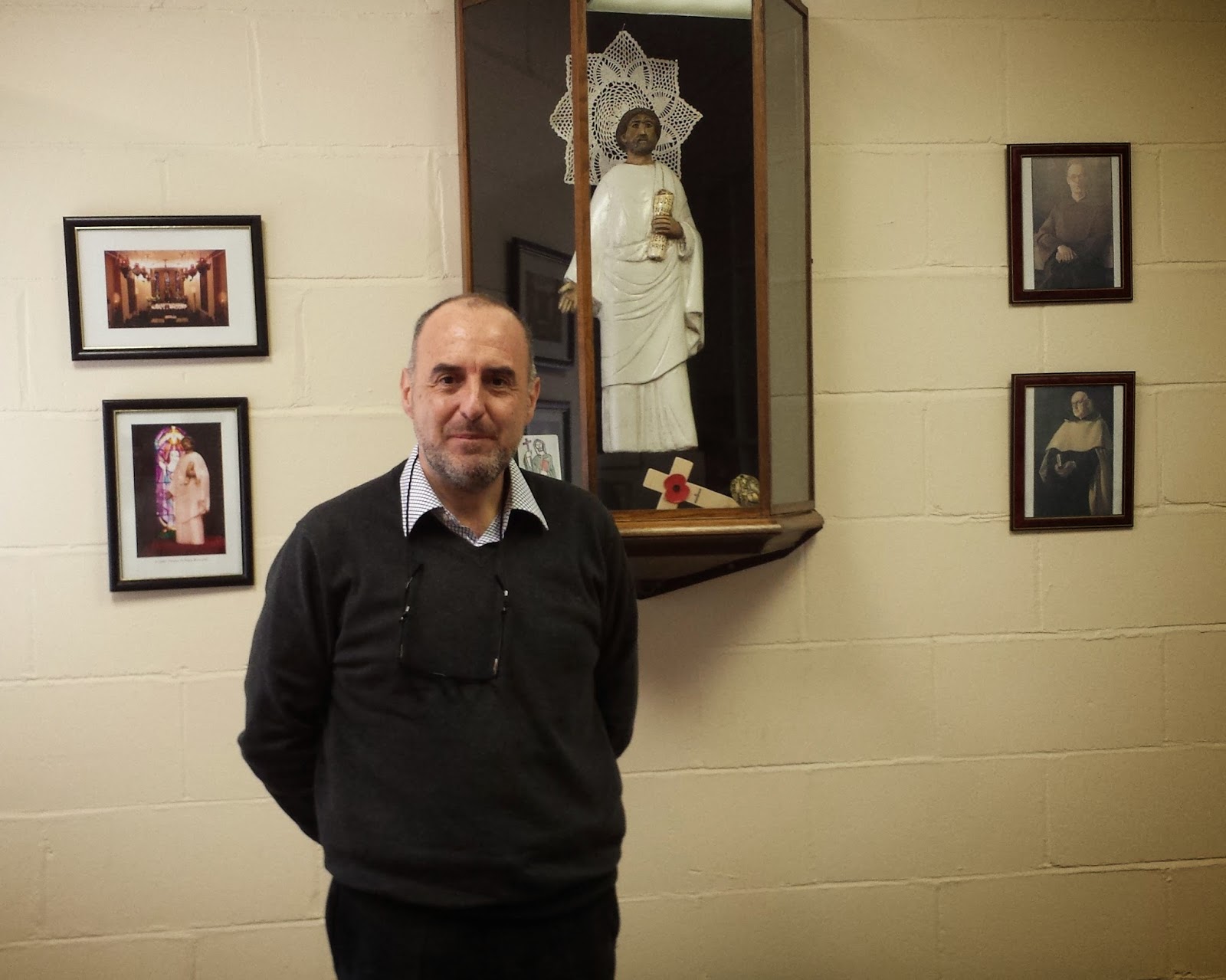 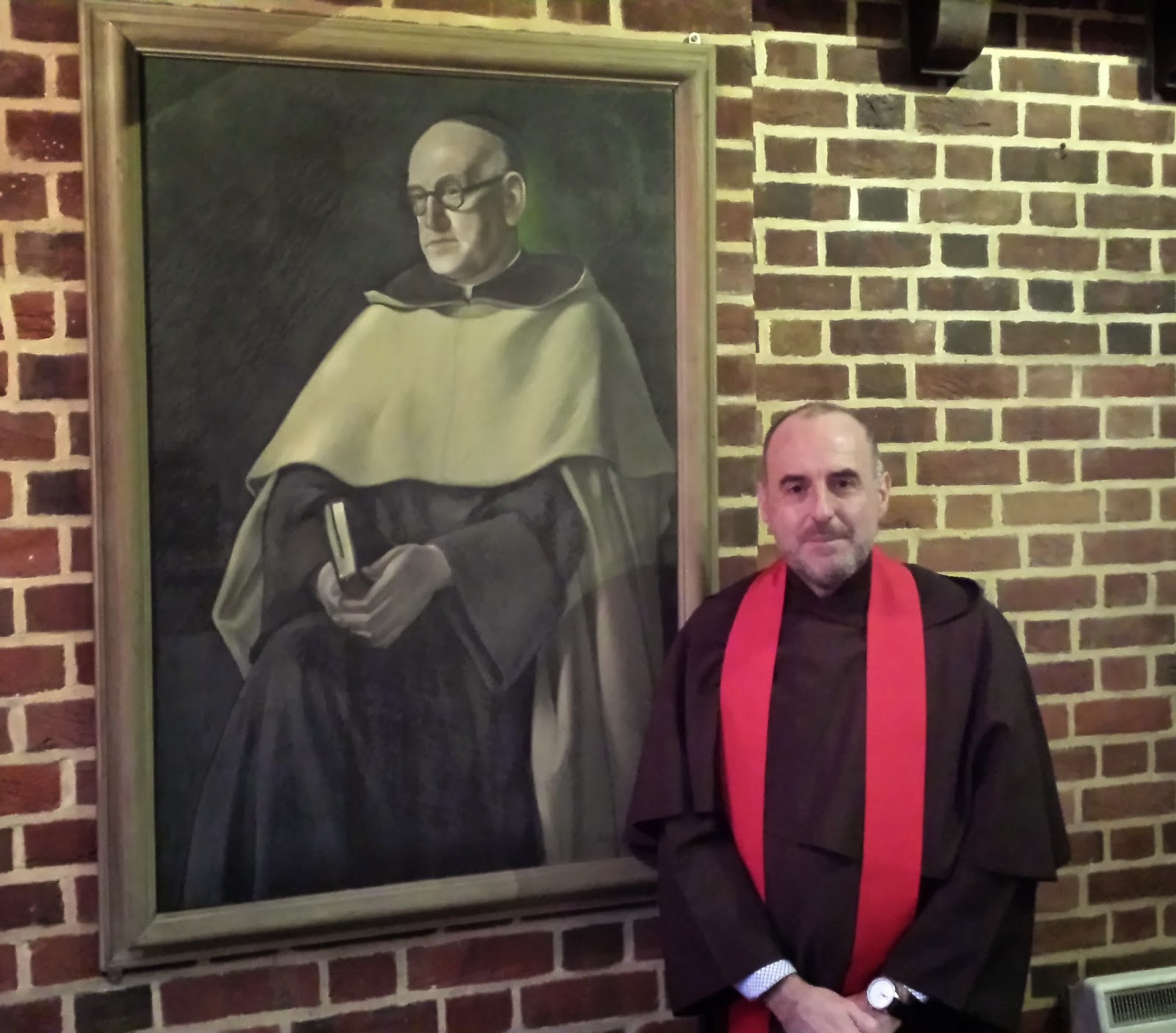 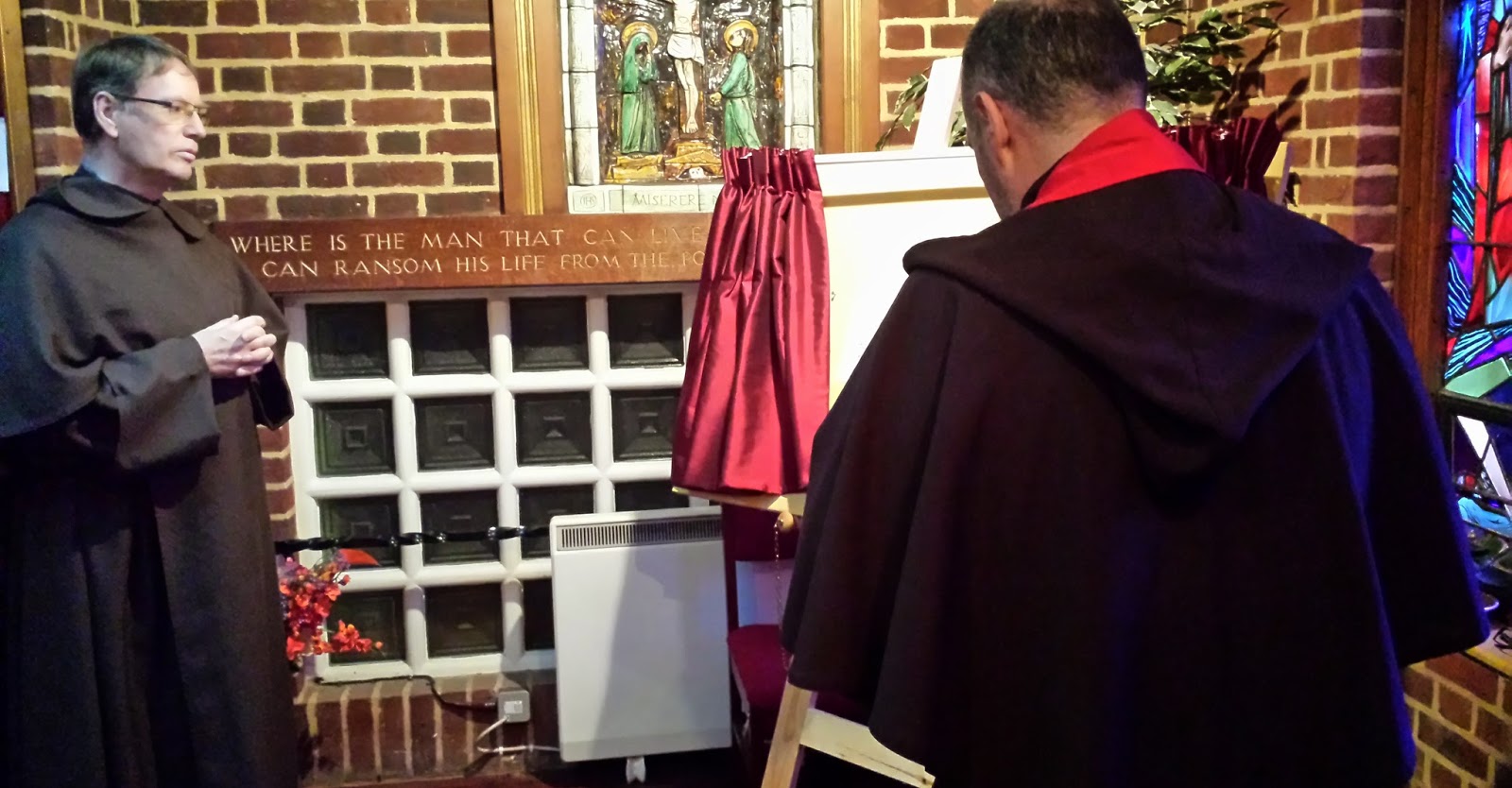 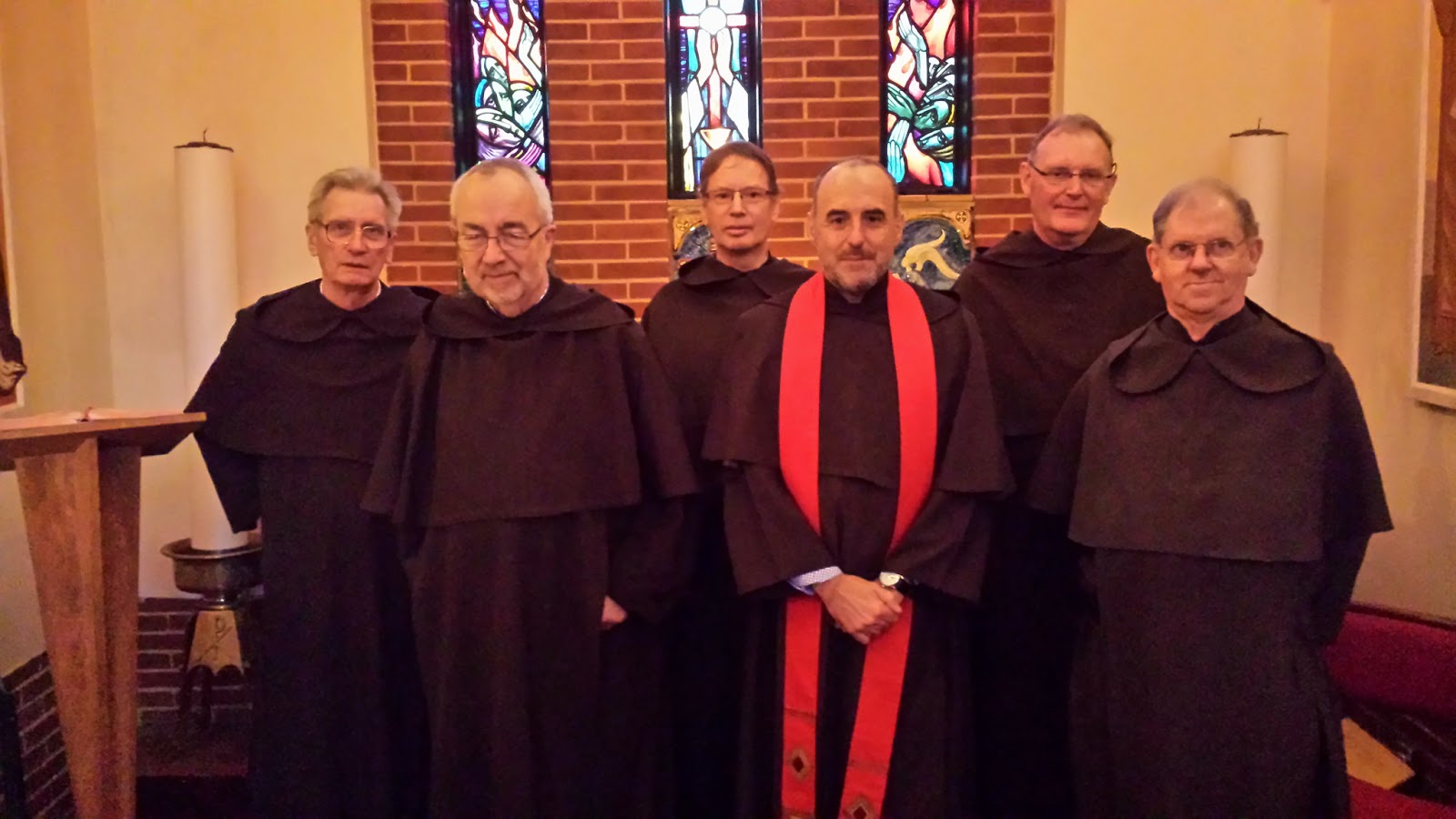 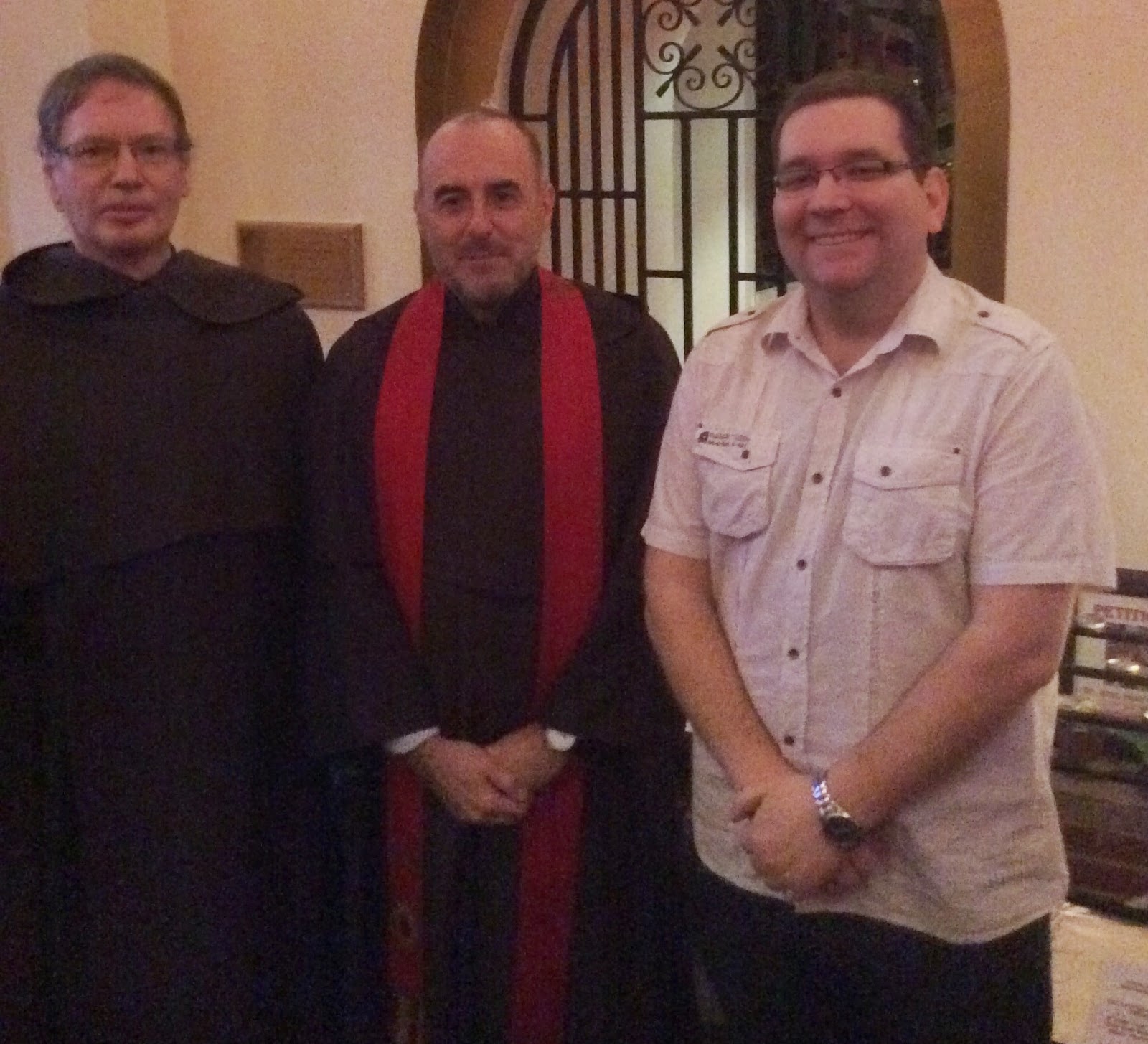 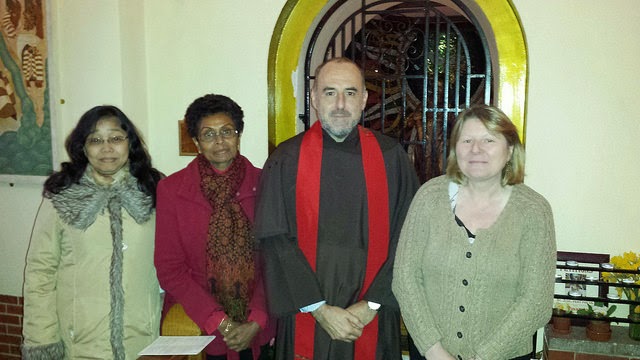 Posted by Shrine of Saint Jude at 10:03 No comments: