Thoughts from the Chaplain - Ordinary time 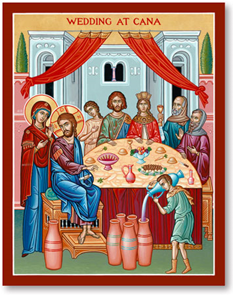 December was a time of preparation for the celebration of the birth of Jesus and on the 25th December, the day finally arrived and we gathered at midnight around the crib to honour and worship the new born infant.  The joy of these festivities then spilled over into the Christmas octave and the remembrance of Saint Stephen, the Holy Family, the Holy Innocents, St Thomas Becket; ending with the churches great Feast of Mary, Mother of God. This year all the feasts seemed to tumble one on top of another and before we knew it were celebrating the Baptism of Jesus and the Christmas season came to an end and Ferial or Ordinary time had arrived.

Let us reflect for a while on this ‘Ordinary’ time.  First of all it certainly isn't ordinary, it just happens to be outside the two great feasts Lent/Easter and Advent/Christmas but there its ordinary-ness ends. In the first two weeks since ‘ordinary’ time started we have had two major events in the Gospel readings.

On January 17th; 2nd Sunday in Ordinary time we heard about the Wedding at Cana when Jesus transformed 6 large jars of water in to wine to allow the wedding celebration to continue.  This Gospel passage has a number of unusual features.  First of all, this miracle is done almost as a favour to prevent the steward and the bridegroom from being embarrassed by the wine running out it is not customary for Jesus to perform a miracle merely to help friends avoid embarrassment. Secondly, this is the only time in John's gospel when we have Mary asking her Son for a favour. And finally, Jesus addresses his mother as "woman, which is not the way one addresses one's mother, then or now. These aspects of the reading point out to us that there is a deeper symbolic meaning to this passage, something of which the Jews were very fond.  So let us look at the examples:  Jesus could have easily told the steward he should have prepared better or to go and get some more wine.  But no, He tells the servants to fill the jars with water.  This shows his sense of compassion which was to be so important in all his ministry;  Jesus calling his mother ‘woman’ is his using the term by which Eve was referred; Mother of all the living as Genesis says;  he is recognizing in Mary the role of ‘new Eve’ because she is his mother and he represents a new creation.  Finally, when Jesus resists her request because his "hour has not yet come", we are reminded of the only other place in John's gospel where Jesus addresses his mother as "woman", and that is when his "hour has in fact arrived" (19:26-27) when he sees her standing at the foot of the cross with the disciple ‘whom he loves’.

On 24th January; 3rd Sunday of Ordinary Time we have in our Gospel reading Jesus standing up in the synagogue and reading from the prophet Isaiah – nothing unusual there.  However having sat down Jesus then says “This text is being fulfilled today, even as you listen”.  The people in the synagogue were astonished because Jesus was applying a text which is interpreted as referring to the Messiah to himself; in other words the one who is reading this to you is the Messiah; Isaiah was prophesying my coming.

We can see from these two readings that this time is far from ordinary in the usual sense of the word.  If we sit with the Gospels of the Sunday masses and reflect on them: pulling them apart; teasing out the meaning; and the hidden symbolism which the evangelists have used.

Posted by Shrine of Saint Jude at 11:05 No comments: